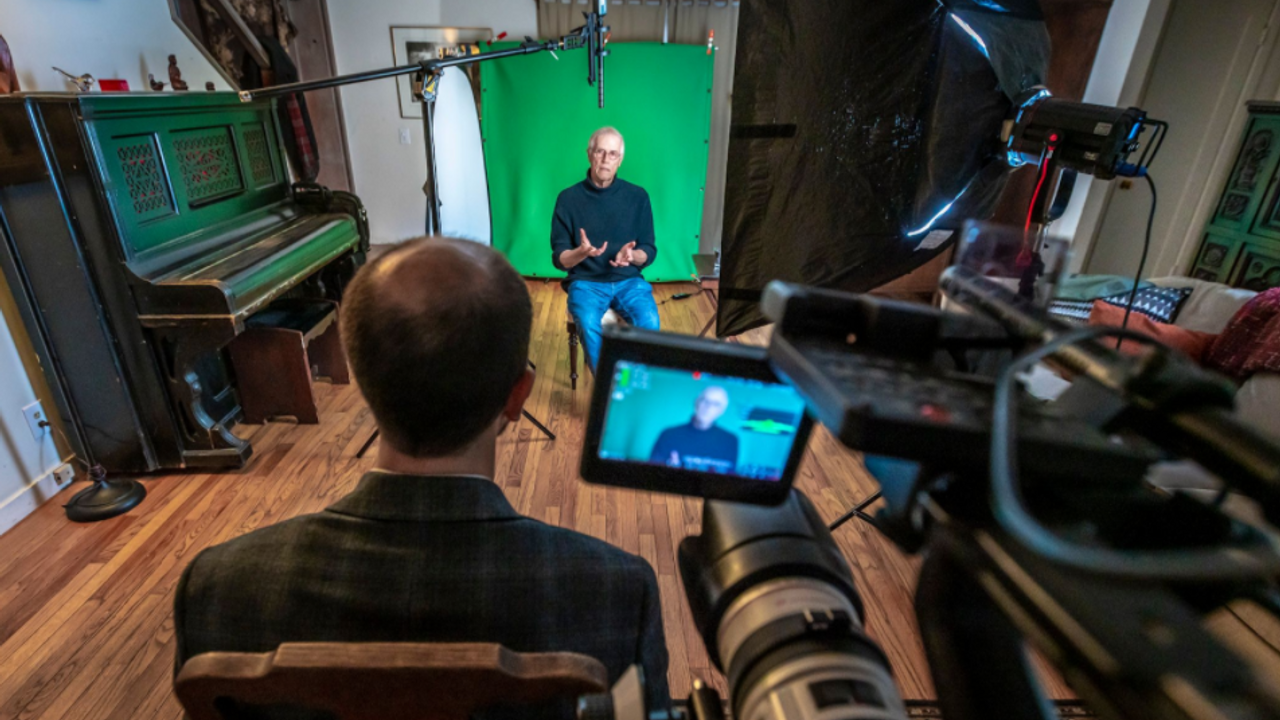 "Beyond Zero" offers an inspirational roadmap for how business can reverse climate change. Here you'll learn how a novice film director created this changemaking documentary on his first try.

The film "Beyond Zero" and the journey to create and use it to help people lead the change is a big part of how 100 Months to Change came to be. This article tells that story. If you are interested in details on how to license "Beyond Zero" as a tool to help you advance your change efforts on ecological regeneration, higher purpose, unleashing workplace culture, and more, please learn more here. Otherwise, enjoy the behind-the-scenes story of how "Beyond Zero" came to be — and what it is still becoming.

The film "Beyond Zero" is the product of a series of serendipities. Writer/Director (and Changemaker) Nathan Havey first encountered the Interface story in Ray Anderson’s book Confessions of a Radical Industrialist in 2010. That’s why, when staging a storytelling event about business's higher purpose in Atlanta, his goal was to find a story from Interface. The storyteller that came forward was Erin Meezan, VP and Chief Sustainability Officer at Interface.

On his first call with Meezan, Havey was so nervous to meet Ray Anderson’s lead sustainability person that his hands were sweaty, his heart pounding, and his mouth dry. He felt like he was talking to Oprah. Meezan graciously accepted the invitation to tell her story, and subsequently, Havey learned much about what had happened at Interface since the publication of Anderson's last book. Soon after, Meezan took the stage alongside five other storytellers, including Elaine Dinos (who would later become a "Beyond Zero" investor), and video from that night would later be featured in the film.

Another storytelling event in Atlanta, co-hosted by the local chapter of Conscious Capitalism, introduced Havey to Jim Hartzfeld, the person who asked Ray Anderson to give the speech that set the whole journey in motion. Between Hartzfeld's and Meezan's reflections, Havey saw a clear story arc that could make a great movie. Once he saw it, he couldn’t let it go.

During years of corporate training, Havey was shocked at how few people had heard of Interface. He wanted to change that. He believed that a great story of a company living into a higher purpose is the most effective way to get other companies to follow suit. He wondered whether a film could be an effective way to reach current and aspiring business leaders all over the world. There was just one problem: he’d never made a movie before.

That led to a conversation with HaveyPro Cinema, a documentary production company founded by Nathan Havey’s father, Jim Havey. The “yes” came easily enough. If Nathan could tee-up the project, then HaveyPro Cinema would do their thing. Erin Meezan arranged a meeting with then Interface CEO Jay Gould, where the project received his blessing and access to the full corporate video archive. Jim Hartzfeld introduced Havey to John Lanier, one of Ray Anderson's grandsons and the Executive Director of the Ray C. Anderson Foundation, and Lanier gave the family’s blessing. All green lights so far.

The first half of 2018 was spent developing the story outline and strategy for the film.  Now the moment of truth: would anyone take a chance on the project with seed capital?  Havey reached out to Mike McFall and Bob Fish, the Co-CEOs of BIGGBY COFFEE, a Michigan-based coffee franchise that he had consulted with for several years. They politely listened to Havey's pitch and agreed to get him an answer in a few days. The answer came back as “yes,” and the project was now officially a go. 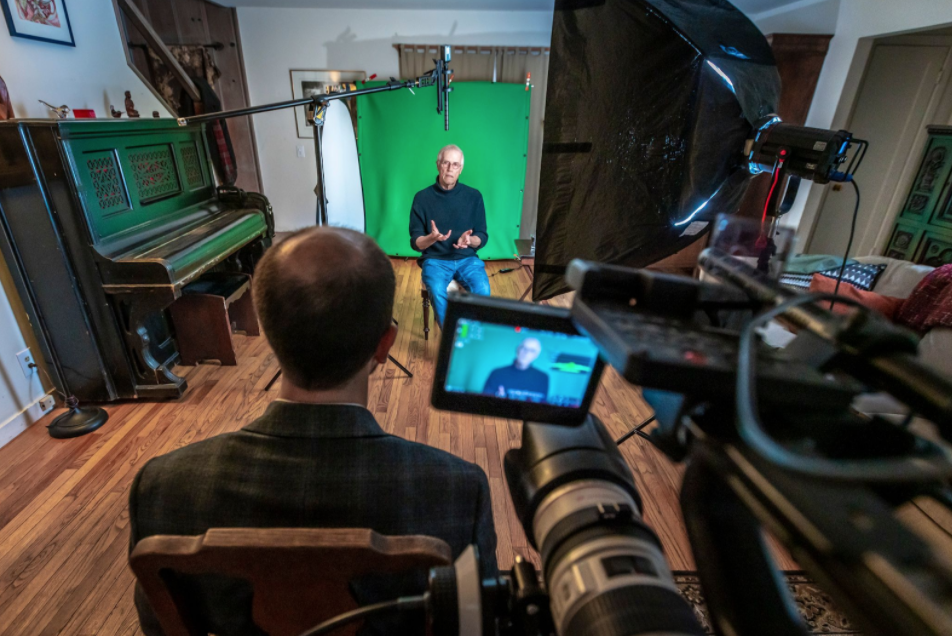 What are we going to do that is as big as that?

In October 2019, the first scene was complete. Havey approached Amanda Kathryn Roman, who was then running Conscious Capitalism’s CEO Summit, with a bold ask that she add an eight-minute clip of the film to the official program at the last minute. That very afternoon she gave Havey one minute on the mainstage to introduce the clip to a room full of 200 CEOs, and then dimmed the lights and let it roll. When the clip ended, a CEO within earshot of Havey asked his colleague, “What are we doing that is as big as that?” That was just the reaction Havey was hoping for.

Also in the room was Diana Propper De Callejon, who, inspired by the clip, would join the team to help with fundraising and distribution strategy as Executive Producer on the film.

At dinner that night, the CEO of Hayward Lumber, Mr. Bill Hayward, asked Havey for a quick conversation. Hayward told Havey the story of how, after meeting Ray Anderson, he had committed his company, Hayward Lumber, to being one of the first lumber companies in the U.S. to use Forest Stewardship Council Certified Lumber exclusively, a sustainability trend that they would help to spread throughout their industry, just as Interface had. Later that day, he committed to becoming a major funder of the film. The endgame was now in sight.

By late February 2020, the team had confirmed three test screenings in Denver in late March, before Havey would take the film on the road for test screenings in New York City, Atlanta, and Ann Arbor in April. Only the first one in Denver actually happened before COVID-19 necessitated that the others become digital screenings and Zoom talkbacks. It’s tough to gauge feedback on a film when you are not even in the room as people watch it, so the team asked test audiences to complete an online survey with their reactions, questions, and ideas for improvement. By the end of April, 135 people had completed the survey, with largely positive reviews, and their feedback refined the film into its festival submission version. 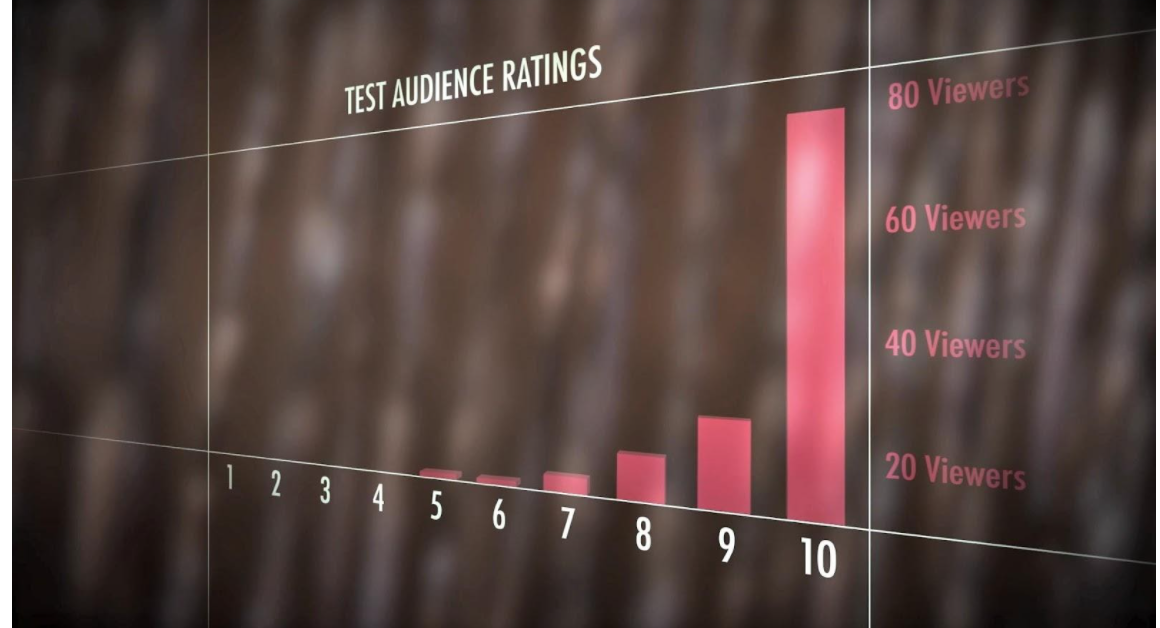 Test audience responses to the question, "How likely are you to recommend this film to a friend?"

Several business-school deans in the test group all but demanded to include the film in their curriculums. CEOs requested additional private screenings for their friends and family, and teenagers said that it gave them hope for the future in a way that no environmental film ever had before.

On May 19, 2020, "Beyond Zero" was submitted to 10 film festivals around the world and the occasion was marked with a toast via Zoom for all the funders and partners. 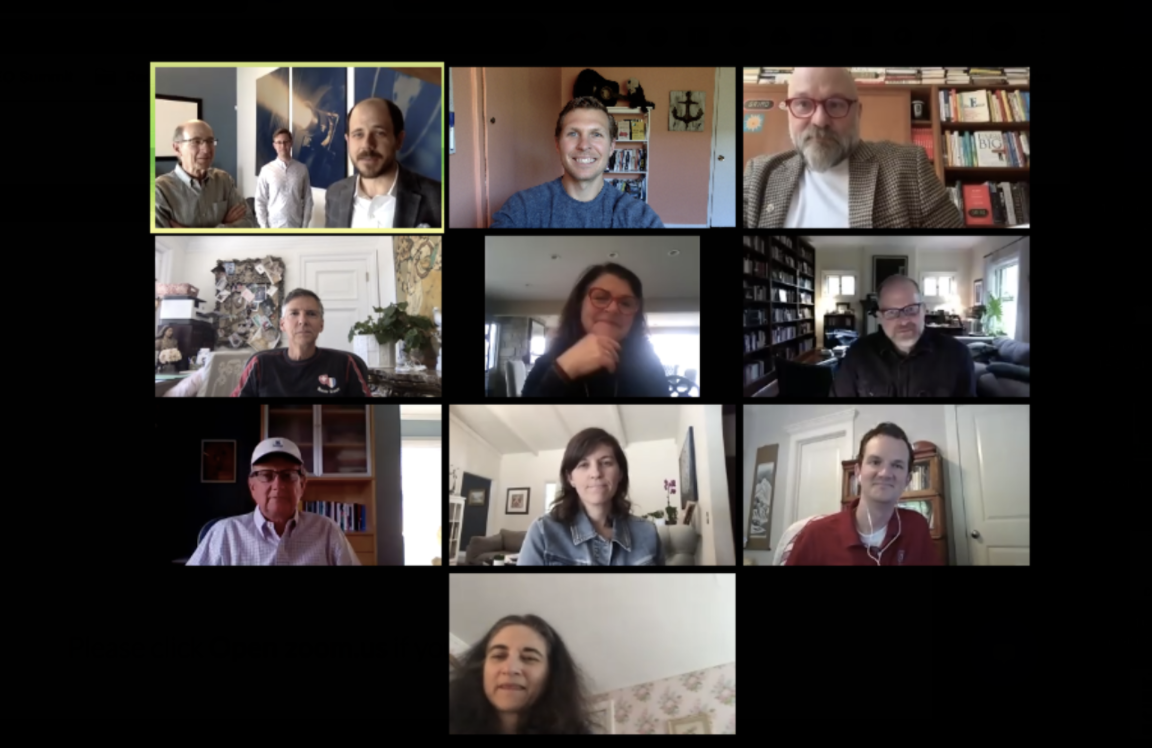 We’re just not that into you.

Of the original 10 film festival submissions, "Beyond Zero" was rejected by eight. The sting of declination letters from the major festivals in Venice, Telluride, Chicago, Toronto, The IDA Awards, and Sundance took the wind out of the team’s sales. Those are all really tough festivals to get into, but still, several high-profile Hollywood insiders had convinced the team they had a shot. In that first round, the relatively small festivals in Boston and Denver were the only festivals who agreed to screen the film; the latter added it to the “local production” category and gave it no billing with the mainstream documentary films.

The audiences in Boston and Denver felt differently, awarding "Beyond Zero" Best Story at Boston, even against narrative features, and the People’s Choice Award for Best Documentary in Denver, even against those mainstream documentaries. Since then, other festivals from around the world have requested to add "Beyond Zero" to their line-ups. Maybe the film had some potential after all.

Hello From the Netherlands

Festival honors, however, are not impact, and on the question of whether sharing the Interface story in this way would help companies to follow Interface’s lead, the jury was still out. Then, on October 29, 2020, Nathan Havey received an email that, among other things, contained this line:

“From seeing your movie, I believe we have some things in common and I was hoping we could get in touch and discuss our potential synergy.”

The sender was Charlotte Extercatte, a former Interface employee who had built a consultancy helping companies to engage their teams in sustainability efforts the way that Interface had. Havey and Extercatte began discussing collaboration opportunities and agreed to see what Extercatte could do with the film in the Benelux region of Europe. Extercatte began reaching out to universities and companies that the U.S. team never could have, and Extercatte and Havey, along with Amanda Kathryn Roman and the rest of the team at the newly formed Institute for Corporate Transformation, began to discuss ideas that would eventually become the 100 Months to Change Coalition. 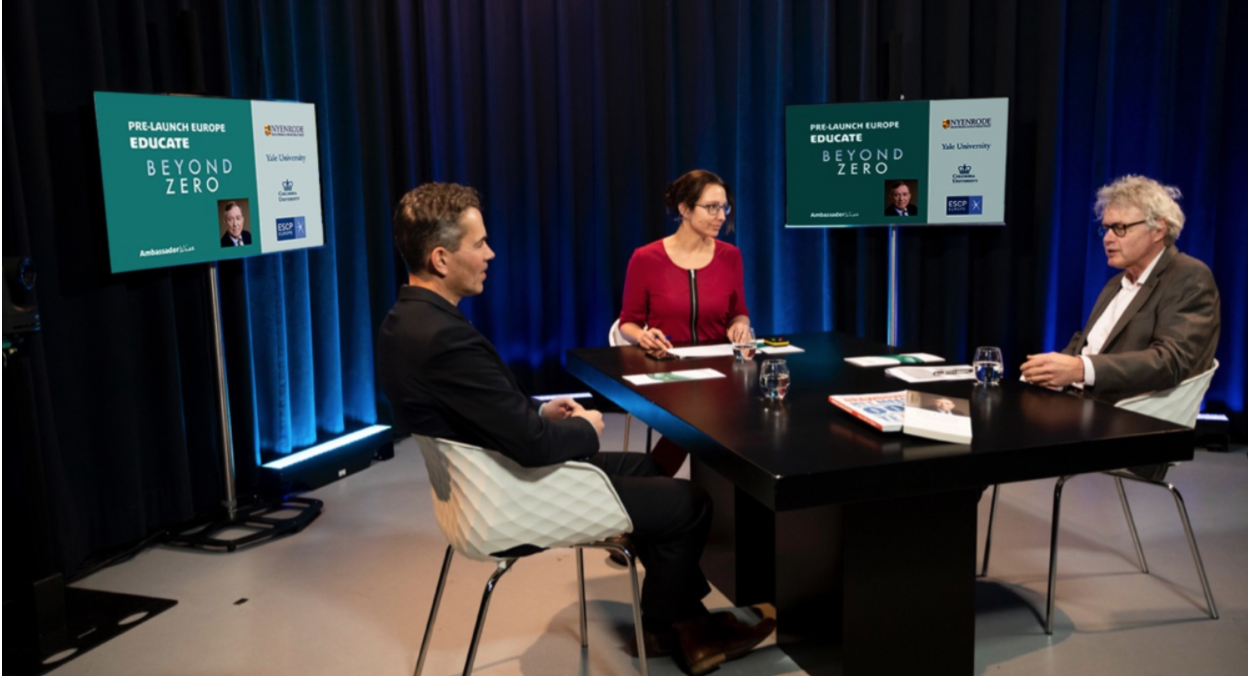 “The most important business story of the past 100 Years”

As a result of the international festivals, the production team began to get inquiries from business professionals and business academics from all over the world wanting to use the film in their companies and classrooms. While working to attract a distributor for "Beyond Zero," the team agreed to do pilot screenings and talkback panels for private companies and to allow a group of nearly 100 business-school professors to use it in their curriculums throughout 2021. The response was electric.

Beyond Zero (Educational Promo) from HaveyPro Cinema on Vimeo.

At the time of writing, the film has been shown in festivals, private corporate screenings, and university curriculums on all six inhabited continents, and the requests keep coming.

Has "Beyond Zero" made an impact?

The film is inspiring conversations for action. It is showing current and aspiring business leaders a new way to think about sustainability and profit that makes room for both at the same time. For many, it is introducing the very concept that a company could go beyond zero environmental harm to achieve a positive impact, supporting the life-sustaining services of nature. Meanwhile, global carbon emissions are still going the wrong way. "Beyond Zero," and complementary efforts by countless other changemakers around the world, are surely making an impact. But to date, it is not enough. That is why we need you.

Lead from the Inside

"Beyond Zero" was created to help companies advance their sustainability efforts and once it was complete, Erin Meezan at Interface advised Nathan Havey that from her perspective, the missing ingredient that is holding most companies back is skill in how to lead organizational change. Meezan suggested the work of Harvard Executive Ed Professor Leith Sharpe.

The Institute for Corporate Transformation worked with Sharpe and Meezan and many others to create a training program to meet this need. We call it the Intrapreneur Accelerator. It’s a self-paced, roughly year-long course that trains people at any level in an organization how to effectively navigate both the hierarchical systems within companies, but often more importantly, the complex web of trust and relationships that exist around and between the lines and boxes on the org chart. The course includes a six-month pilot project that asks participants to use what they have learned to advance a change initiative of their choosing in the company in real time.

At the same time, Charlotte Extercatte has been hard at work on the related issue of how to engage a culture around advancing climate resiliency in their company. Extercatte and her many collaborators have designed a gamified approach that may be exactly what will support your efforts to lead change from inside. Read all about it here.

Lead from the Outside: Beyond Zero Ambassador

Based on their experience bringing "Beyond Zero" into companies to ignite, advance, and support sustainability efforts, Extercatte and the ICT team have created a program that allows consultants to license resale rights for "Beyond Zero" and organize their own screenings of the film, as well as incorporate the film into their consulting products and sell private corporate screenings and other trainings from the Institute for Corporate Transformation and Transform 4C. If you are interested in using this tool to help expand its impact, and your own, you can read all of the details here.